Our spectacular Fighting Owls had a great baseball and lacrosse season this spring!! Winning championships, being named No. 1 lacrosse seeds in the NJCAA, going to the JUCO Baseball World Series, being selected Players of the Week, Month, and All Americans – with a couple of heartbreakers along the way – check out all the details below!

After waiting over 1,000 days for an opportunity to defend their 2019 NJCAA National Championship, the No. 1 seed Harford Fighting Owls Women's Lacrosse team stepped onto the field at Onondaga Community College in Syracuse, NY and downed the No. 3 Lazers 19-14 for back-to-back titles. Read more about Women's Lacrosse Championship.

No. 10 Harford Falls to No. 7 Cowley in the NJCAA Division I JUCO World Series

Harford’s season came to a halt in Grand Junction, Colorado on Sunday evening, May 29, as the Fighting Owls lost 12-4 to the Cowley College Tigers on the second day of the NJCAA Division I JUCO World Series. Harford scored four runs in the first two innings, but Cowley matched them with four of its own. From there, the Tigers would outscore the Fighting Owls 8-0 over the final five innings of the game. Harford finishes 2022 with a 48-9 record. Read about the game here.

Taz DeLaney, Cayden Onagi, Zach Sheppard, and Nate Surd have been named NJCAA Men's Lacrosse All-Americans. All but sophomore Nate Surd are freshmen. The No. 1-seeded Fighting Owls recently wrapped their season with a 10-2 record, a third consecutive Region 20 Championship, and an appearance in the NJCAA National Championship Final Four. Learn more about the new men’s lax All-Americans.

Harford’s Fighting Owls baseball team has been dealt the No. 10 seed in the 2022 NJCAA Division I JUCO World Series and will face No. 1 Walters State on Saturday, May 28 at 2 p.m. EST. The Senators, based out of Tennessee, have held down the top spot in the NJCAA DI Baseball Poll since April 11. Harford was ranked No. 15 in the most recent poll after capturing the East District Championship over Florence-Darlington (SC). Read more.

On the heels of winning their 8th Region 20 Baseball Championship, the Fighting Owls scored seven runs to take a 10-7 victory over the No. 2 Florence-Darlington Stingers after trailing 7-3 heading to the bottom of the eighth. The win earns Harford the East District Championship and one of 10 bids to the NJCAA JUCO World Series in Grand Junction, Colorado. The Fighting Owls are now 48-7 on the year. Harford's Baseball heading to Grand Junction.

No. 1 Harford Falls to No. 5 Nassau in Semifinal Clash

The National Junior College Athletic Association has named Harford’s Joe Quelch as the NJCAA Division I Baseball Player of the Week for Week 10. He currently leads the Fighting Owls in batting average (.426), runs (69), hits (52), walks (43), stolen bases (26), and home runs (16). More about Quelch named Player of the Week.

Harford Men's Lacrosse attacker Cayden Onagi has been named Region 20 Division I and the MD JUCO Conference Player of the Month for April, region officials announced. The Fighting Owls recently wrapped their season with a 10-2 record, a third consecutive Region 20 Championship, and an appearance in the NJCAA National Championship Final Four. Read more about Cayden Onagi.

Harford Men's Baseball infielder Trey Cruz has been crowned the Region 20 Division I Player of the Month for April. Cruz's batting average jumped 38 points (.328 to .366) between April 1-30. He tallied at least one hit in 16 games and finished with seven multi-hit games. The New York native slammed nine home runs in April as well. Read more about Trey Cruz.

Ten Fighting Owls were named to the All-Region 20 Men's Lacrosse Team this past weekend, the highest number in program history and the most of any team in Region 20 this season. 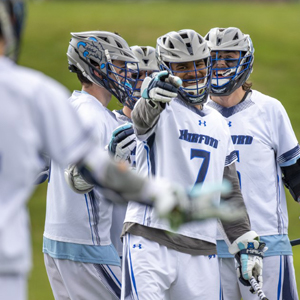